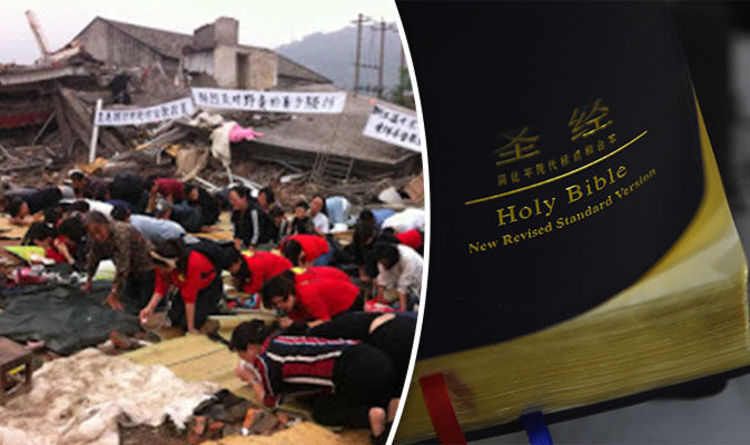 Violence broke out in Shanggiu in Henan province after 300 police officers and officials demolished the Shuangmiao Christian Church—which was under construction.

Officers dragged out around 40 Christians with one worshipper comparing the brutal scenes to the Japanese invasion of China during the Second World War, according to charity China Aid.

Eight Christians remain in custody following the incident amid a crackdown on churches by the communist regime.

China Aid said: “During the demolition, officials beat dozens of church members, pushing them to the ground and twisting their hands.

“The church was completely razed, and a church member likened the scene to the Japanese invasion of China during World War II.

“Of the 40 Christians seized, eight are still in custody, and the cases of Shuangmiao Christian Church pastor Zhang Di and the church’s vice director, Lü Yuexia, were recently transferred to the Procuratorate, which will decide whether or not to formalise their arrest.”

The Supreme People's Procuratorate is the highest agency in China responsible for prosecutions.

According to churchgoers Xi Jinping’s Communist Party ordered the church to be destroyed after branding the building an “illegal structure”.

Party officials were sent to the church to search the building and belongings of people on site.

The demolition came as row between the church and government escalated over allegations the church refused to pay a £450 arbitrary road usage fee.

Pastor Zhang Di was summoned for questioning last month and accused of assaulting police officers and attacking a village official.

Church leaders are urging the government to release the pastor and churchgoers. They are also calling for police linked to the investigation to be punished.

The Chinese Communist Party has launched a major crackdown on religion in recent months in an attempt to oppress religious freedom and exercise control.

Churches not sanctioned by the government have been put under surveillance with hundreds of Christians arrested for disturbing public order for offences such as holding bible study groups and displaying crucifixes outside their homes.

There have been reports of Christians being banned from praying, singing hymns, crosses removed from buildings and people arrested for attending church services.