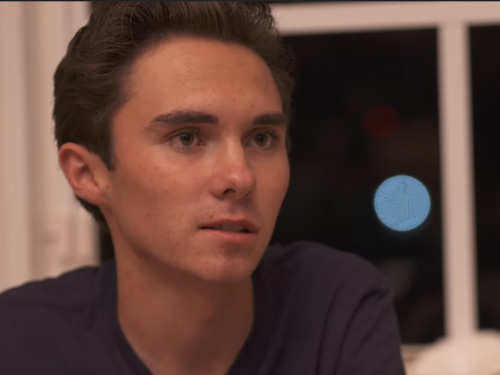 The Outline interviewed David Hogg, a 17-year old survivor of the shooting in Parkland, Florida, who says he is the NRA's "worst nightmare." Hogg's interview was laced with profanity against his detractors, Gov. Rick Scott, the NRA, old people and others.

Hogg said he became an activist because adults don't know how to "use a f*cking democracy":

"When your old-ass parent is like, ‘I don’t know how to send an iMessage,’ and you’re just like, ‘Give me the fucking phone and let me handle it.’ Sadly, that’s what we have to do with our government; our parents don’t know how to use a fucking democracy, so we have to."

An edited down version of this clip was removed by YouTube as harrassment after it was linked by the Drudge Report.

"It just makes me think what sick fuckers out there want to continue to sell more guns, murder more children, and honestly just get reelected," Hogg said. "What type of shitty person does that? They could have blood from children splattered all over their faces and they wouldn’t take action, because they all still see these dollar signs."

"Honestly, it's alright that people are buying more guns. I just care that they are being safe individuals. And they can practice their Second Amendment rights all they want. I don't give a f*ck about that. I just want to make sure that a crazy-ass individual doesn't get an AR-15 or any weapon at all," Hogg said about guns.

To Florida Gov. Rick Scott: "You’re kind of like Voldemort at this point. You should just retire, because you aren’t going to get elected to Senate."