This week, the Trump administration completed its move of the US embassy from Tel Aviv to Jerusalem.

At the opening ceremony, two of the American speakers were evangelical superstars: Pastor Robert Jeffress, the author of several doomsday books about Israel, and John Hagee, who interpreted recent lunar eclipses as evidence that the end times were nigh. The Fox News personality Jeanine Pirro, meanwhile, declared that Trump had “fulfilled biblical prophecy”.

The ceremony coincided with massive protests, in which 60 Palestinians were killed by Israeli forces.

Thousands of miles away, in her home outside Colorado Springs, Kimberly Troup sat in a cluttered basement office. She is an evangelical Christian who takes to heart the Bible verse in which God speaks of the Jewish nation: “I will bless those who bless you, and whoever curses you I will curse.”

Accordingly, she has devoted 22 years to Israel. She is now the US director of Christian Friends of Israeli Communities, an advocacy group with a Zionist ideology. Two other CFIC employees work with her. This week, they have been very busy.

Ever since she was a child, in Kentucky, Troup has been immersed in Israel. Her father saw the creation of the state in 1948 and the six-day war of 1967 as evidence of biblical prophecy surrounding the end of the world. Troup believes in such prophecies, though she does not pretend to know when they will occur. She sees it as her Christian duty to care for Israel, to defend it against “Arabs” who are “not interested in peace”.

As she described her position an associate, previously silent, spoke up, quoting the book of Isaiah: “You who call on the Lord, give yourselves no rest, and give him no rest till he establishes Jerusalem and makes her the praise of the earth.”

Christians around the world have always had an intense interest in the Holy Land. It has often been believed that the restoration of the Jews in Palestine will bring about a holy war between good and evil (as prophesied in the Book of Revelation), after which God will set up a holy kingdom on Earth.

In the 1970s, Troup’s father was one of millions who purchased a book called The Late Great Planet Earth, which interpreted events in Israel as evidence that the great war of Armageddon would happen by the late 1980s. The non-fiction bestseller of the decade, it was followed by the wildly popular end times conspiracy tome The New World Order, by the televangelist Pat Robertson, and then the Left Behind novels and films, which concerned violent clashes in Israel that would bring about biblical prophecy.

To outsiders, these pieces of doomsday pop culture seem like far-fetched lunacy. For millions of Christians, they are a roadmap to the end of the world.

‘We’ve been through all this before’

The recent move of the US embassy has solidified the notion – not shared by the Palestinian people – that Jerusalem is the capital of Israel, an essential piece of the end times puzzle. In a recent poll of evangelicals from LifeWay, more than half of respondents said end times prophecy was the reason they supported Israel.

However, even in Colorado Springs, which in the heyday of the George W Bush administration was unofficially known as the “Evangelical Vatican”, such interpretations of the move are not universal.

“We’ve been through all this before,” said Bruce McCluggage, a former evangelical who now identifies as a “follower of Christ”. Throughout his youth, in the 1970s and 80s, McCluggage was part of the Christian movement that interpreted the signs of Israel as evidence of the last days. But for McCluggage, after a slow-burn of things not coming to pass, that conviction slowly faded.

“It was a classic tool used to witness to people,” he recalled. “We’d ask: ‘If Jesus returned today, would you go to Heaven?’ It was kind of a threat … and we thought, with Israel coming together, we could hasten the return of Jesus.”

With long blond hair and a stout little chin beard, McCluggage still looks like a member of the California Jesus People, a movement of post-hippie Christians who were obsessed with end times prophecy. (The term “left behind” comes from a popular song of the era, I Wish We’d All Been Ready, by Larry Norman, the godfather of Christian rock.) He still attends church, prays and reads his Bible, but has slowly distanced himself from the Christian right.

Today, he sits in the Wild Goose Meeting House in downtown Colorado Springs, a venue known for its “post-evangelical” or “progressive evangelical” contingent. It looks like any other hip modern coffeehouse, serving expensive pour-over coffee and craft beers to an indie rock soundtrack. Books with titles like Christianity After Religion and The Rebirthing of God line the shelves; events like What Would Jesus Brew? – beer-centric Bible study – regularly take place.

The hallmarks of the old Christian rightwing culture are still present: it’s very white, middle-upper class, and peppered with soldiers in fatigues. The town has five military installations. But the shop is representative of a shifting attitude toward Christianity in downtown Colorado Springs – one that doesn’t have much interest in the apocalyptic rhetoric surrounding Israel.

“There are plenty of young millennials downtown that would call themselves evangelical, even conservative, but are a very different breed from their parents,” said Russ Ware, co-owner of the Wild Goose, who grew up evangelical but no longer identifies that way.

“They’re mostly not Trump supporters; they have a spectrum of views on LGBT issues, and they’re not on board with the end times theology … There is definitely a kind of end times fatigue with this generation.” 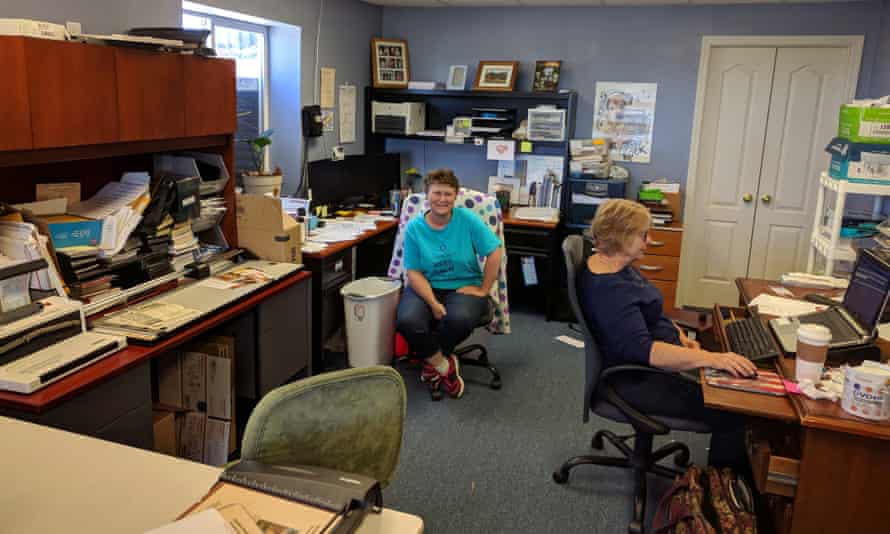 This “post-evangelical” generation was raised on a steady diet of low-budget movies and pulp novels that injected a potent fear of the coming Rapture, a dynamic most eloquently described by the late Billy Graham. “I pick up the Bible in one hand,” he said, “and I pick up the newspaper in the other. And I read almost the same words in the newspaper as I read in the Bible. It’s being fulfilled every day round about us.”

In the 1990s, Christopher Stroop was one such evangelical. He has now abandoned his faith and leads a social media campaign seeking to galvanize “exvangelicals” with hashtags like #emptythepews and #raptureanxiety. He said he had “definitely seen a lot of ex-evangelicals talking about being triggered by the Jerusalem news”.

It’s not only post-evangelicals who are dubious about the end times scenario. Kimberly Troup believes Israel will be the center of Armageddon, but she doesn’t think it’s all happening now. The author of her father’s favourite book released follow-ups that predicted ever-later dates for the Earth’s demise. She is dubious about anyone who claims to know when the world will end.

“The great fear was moving the embassy to Jerusalem would be the start of World War Three and Armageddon,” she said. “There’s a little rumbling, but nothing new. We’ve had this for 600 years. It’s gonna be business as usual …

“It feels worse than it is because you only hear about the bad stuff on the media.”